The Best Superfood Product Ever Just Got Better Quite simply, LifeSource SuperSprouts is the most nutritious, best tasting superfood product available anywhere. It is packed solid with nutrient dense ingredients and life enhancing phytochemicals.

LifeSource SuperSprouts were created with one thought in mind: gathering the purest, nutrient-dense foods on the planet that have phytochemicals that, according to research, help the body age better.* They have everything the body needs to enjoy optimal health.* LifeSource SuperSprouts combine the most powerful superfoods with organic sprouts. These super sprouts provide the life force energy that gives birth to the entire plant kingdom, s seed providing the spark that bursts new life to a new plant.

Plankton are the genesis of all life. Life as we know it is only possible through the miracle of photosynthesis, the reaction of sunlight, water, and carbon dioxide. Plankton are considered the first link in the food chain, and they provide every nutrient the body needs to live. Nutritionists often claim that these micro-algae are the perfect food. Plankton are abundant in metabolic pigments, including chlorophyll, phycocyanin, and carotenoids, like alpha and beta carotene. Chlorophyll supports healthy blood flow, supports general body detoxification, and strengthens immune function.* 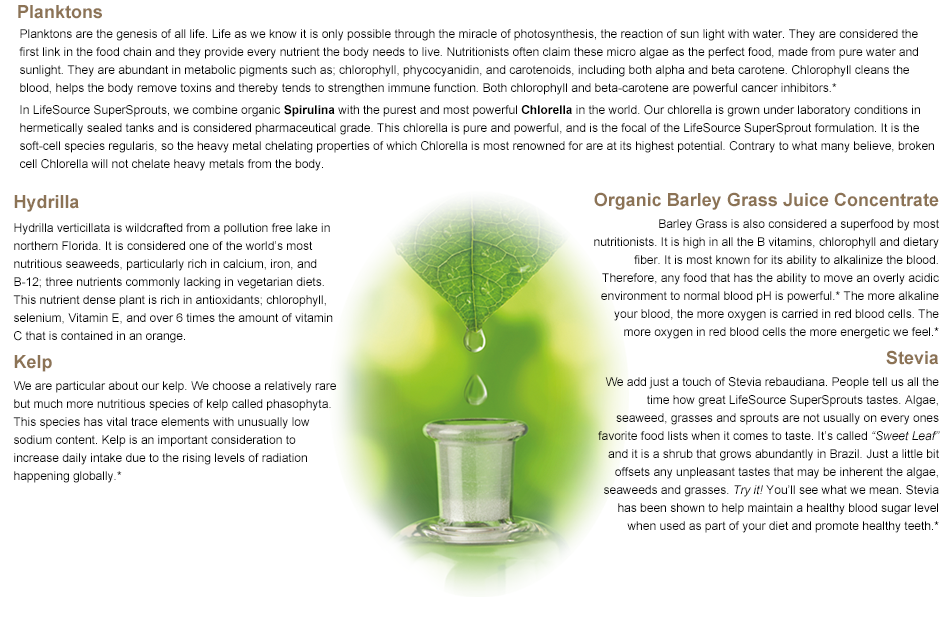 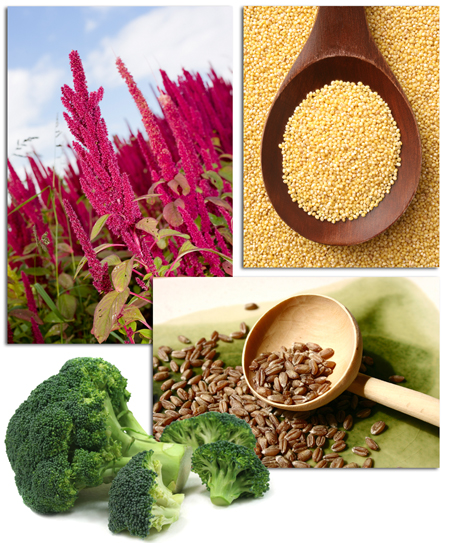 Golden flaxseed is one of the most nutritious seeds on the planet. It is loaded with essential fatty acids, but most people don’t know that flaxseed also has a high concentration of enzyme inhibitors, making it difficult for the body to absorb. Sprouted flaxseed allows your body to absorb all the vital nutrients, enzymes, amino acids, and vitamins. In fact, the process of germination fundamentally changes the nutrient composition of the seed.

Vegetarians and other non-fish eaters are typically deficient in eicosapentaenoic acid (EPA) and docosahexaenoic acid (DHA).

DHA is a major structural component of the mammalian brain and the most abundant essential fatty acid in the brain. It is one of the main reasons that fish has a reputation for being brain food. The acid supports normal development in the brain, eyes, and nerves and has been shown to reduce stress and frustration.*

Amaranth was the staple food of the Aztec Indians and was called the “golden grain of the Gods.” It is high in protein and dietary fiber.*

The broccoli sprout is one of the most researched natural ingredients for its powerful properties. Broccoli sprouts contain a phytochemical called glucoraphanin and an enzyme called myrosinase, both of which are precursors to sulforaphane.

Quinoa is 18% protein and has the most balanced amino acid profile of all grains. Most grains lack lysine and, therefore, cannot biosynthesize into a complete protein. Quinoa is an excellent source of dietary fiber and is high in phosphorus, magnesium, and iron. Quinoa’s high magnesium content perfectly balances the high calcium in chia seeds.

Chia seeds are the richest non-marine source of omega-3s and dietary fiber. As a result, they promote cardiovascular health by promoting healthy blood pressure and maintain cholesterol and triglyceride levels that are already in the normal range.* Chia seed has six times more calcium than milk, so they also contribute to strong bones and assist in joint function.*

Kirlian photography can capture the subtle energy fields that emanate from any substance. You can use it to determine the amount and integrity of life force energy of any physical matter. This is usually referred to as an aura in human bodies.